The Block 2022 exclusive: How teams reacted to Joel and Elle quitting The Block – Michmutters

When the remaining block contestants were told Joel and Elle had left the show, most were confused and shocked by the sudden departure.

But not Tom and Sarah-Jane who sensed the Bondi couple might not have settled into life on the building site as well as everyone else.

“Something was just off, you could just tell something was off,” Sarah-Jane revealed in an exclusive video interview with 9Entertainment.

“We thought that because we’d just done a 48-hour challenge maybe that was so stressful for them, they were so sleep deprived and that’s why they were really stand-offish – but obviously they were not coping at all and that came across .”

For Ankur and Sharon, the abrupt exit was unexpected because Joel and Elle seemed “upbeat” when they chatted to the couple during their all-nighters in the 48-hour challenge.

“When I heard Joel and Elle were leaving it was more so that there must have been a massive reason for them to go,” Ankur said.

Sharon added, “I think it’s very easy to say ‘Oh they just gave up, too hard’ – I don’t think that’s fair because it’s OK to say it’s too much, it’s too hard or it’s not for us.”

EPISODE 1 RECAP: Five new teams arrive in the country and realize their tree change will be tougher than they thought

Dylan and Jenny were equally shocked with Jenny left wondering why Joel and Elle hadn’t mentioned their plans before leaving.

“I thought it was weird they didn’t say goodbye or didn’t tell anyone because we saw them the night before at judging, and they just told us they were going for dinner and they never came back,” she explained.

In contrast Omar and Oz had a great experience with Joel and Elle who said always made time to have a chat with them.

“It’s very hard to say any bad things about them, I think they’ll be very regretful of it but it is what it is,” Omar said.

The teams found out about Joel and Elle’s exit on the day of The Block‘s promo shoot. This was meant to be their third day on set and followed the House Decider challenge bedroom judging, where Joel and Elle received some harsh feedback about their design choices.

Host Scott Cam broke the news to contestants and explained Joel and Elle had said The Block “is not on brand for them”.

It wasn’t long after executive producers had told him the pair had quit and he was still processing the news when he spoke to the teams.

“We weren’t quite sure why they left, because they didn’t actually mention it to us. The thing is, The Block‘s not for everybody and we wished them well, but we just didn’t know why they’d left, and to get to the bottom of that you’ll probably have to ask them,” he said.

Joel and Elle’s exit meant a new team had to be found at the last-minute.

“It was a bit of a shock, because I know the opportunity that The Block presents and we weren’t ready for that, but that’s all right. We scrambled, we got another new couple and they were fantastic. So, an opportunity lost is an opportunity gained for someone else.”

While Scotty’s co-host Shelley Craft wasn’t on set when it happened she wasn’t as shocked as the others because she knows how tough The Block es.

“I can’t believe it hasn’t happened before,” she told 9Entertainment.

“You know, it’s not for everyone. It’s bloody hard, and there are much easier ways to have your 15-minutes [of fame]. The Block is virtually impossible until it’s done, and then the reward and the amount of just personal growth that comes out of it is enormous.” 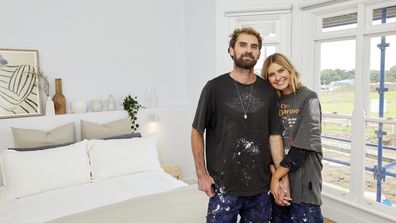 The judges were not happy with the “modern” vibe.