A car once owned and driven by the late Princess of Wales is up for auction.

The car was driven by Princess Diana between 1985 and 1988 and featured a number of modifications made for her protection.

It was ordered as a replacement for Diana’s red Ford Escort which had a canvas roof and was deemed unsafe by police protection officers.

Diana, who had access to the royal family’s fleet of Rolls-Royces and Daimlers, preferred Ford with this being the third and final Ford Escort owned by the royal.

This make, a Ford Escort Turbo RS, included specifications for Diana to ensure she and her children were adequately protected.

READMORE: Meghan left struggling on wedding day after being ‘rude’ to aid

It was painted black – a change from Ford’s all-white range available at the time – and is believed to be the first and only black RS Turbo Series 1.

“[Ford’s] Special Vehicle Engineering department was tasked to paint the car and fitted a regular five-slat front grille to assist in the ‘stealth makeover’ and a secondary rear view mirror for the protection officer with a radio in the glove box, the cable for which is still visible today,” Silverstone Auctions says in its listing online.

“The RS Turbo was never intended to be driven by the future Queen and was inconceivable as transport for the future King William, it remains the most daring choice of class-dividing motorcar by any member of the Royal Family since.”

Photos from the period show Diana in the car parked around Kensington during shopping trips and lunches with friends.

In one, a young Prince William can be seen in the back seat.

The car was returned to Ford in 1988 with 6,800 miles (11,000 kilometres) on the odometer and sold internally where it was used by the wife of one of the company’s managers.

The car was later used as part of a promotional giveaway by a radio station in 1993 and sold again in 1994 before coming into the hands of a collector in 2008.

“The car’s history file has been meticulously archived and copy internal memos from the Ford Motor Company confirms the ‘re-plating’ of the registration number, as is common with ex-Royal cars,” the auction house says.

“Further documentation from the DVLA show the successful re-registration of the car back to “C462 FHK” in later years.”

The auction is being held on August 27.

In June 2021, a Ford given to Princess Diana as an engagement present was sold at auction for more than $90,000.

The owner of the 1981 Ford Escort Ghia kept its origin a secret for 20 years.

The vehicle was gifted by Prince Charles to his future bride in May 1981 and used by Princess Diana until August 1982.

The car also had a copy of a silver frog mascot given as a gift to the princess by her sister, Lady Sarah Spencer. 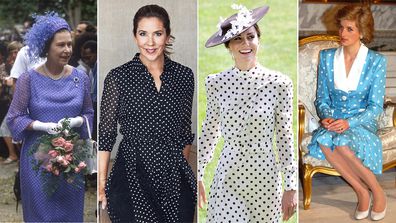