Princess Charlotte has stepped out with her parents the Duke and Duchess of Cambridge at the Commonwealth Games in Birmingham.

The seven-year-old joined prince william and Kate Middleton along with the Wessexes— Prince Edward, Sophie, Countess of Wessex and their two kids — at the Sandwell Aquatics Center to take in a session of swimming.

It’s the second appearance the young royal has made this week, after a rare video alongside dad Prince William to wish the Lionesses good luck ahead of their Euro 2022 win on Sunday.

Doting mum Kate was seen on Tuesday explaining things to her daughter and gently stroking Charlotte’s hair above her plaits.

At one point, Prince William was seen leaning across his wife to chat to his daughter.

During the morning swimming session, the young royal watched a raft of Aussies in action, including Brianna Throssell, Abbey Connor and Elizabeth Dekkers qualifying for the women’s 200m butterfly final.

Charlotte also met with Warren Lawrence of Jamaica, dutifully shaking hands with him as mum Kate made the introduction.

Later, Princess Charlotte was seen sitting in between her parents, as Kate looked over, laughing at her husband’s reaction to something in the aquatic centre.

The young princess was wearing a dressed in a £39 ($69) navy Breton striped jersey dress by UK designer Rachel Riley featuring a Peter Pan collar with lace trim edges, along with white strappy sandals.

The Duchess donned an all-white three-piece ensemble and Prince William opted for a light blue and navy shirt and jacket combo with stone-coloured chinos.

The trio were one row in front of the other working senior royals: the Earl and Countess of Wessex and their 18-year-old daughter Lady Louise and son James, Viscount Severn, 14.

On Monday, Lady Louise was spotted at an event wearing a dress previously worn by her mum, the Countessas she attended alongside her parents and younger brother.

Later, the Cambridges and Wessexes were both spotted enjoying the hockey — a personal favorite of the Duchess of Cambridge, who used to play the sport at school.

The two families watched England take on India at the University of Birmingham.

At one point the duchess and countess got into an animated discussion as they shared laughs and plenty of hand gestures.

Princess Charlotte also got introduced to the Commonwealth Games mascot, Polly, across the day’s outings.

The seven-year-old was spotted carrying a soft toy of the mascot after the hockey.

Parents William and Kate held one each as well, presumably for Princes George and Louis at home.

“Brilliant seeing athletes from all over the Commonwealth performing swimmingly at @BirminghamCG22 today,” a tweet on the Duke and Duchess of Cambridge’s official account said, alongside the image.

The Cambridges then headed to Arena Birmingham to watch the gymnastics, with the men’s horizontal bar final and the women’s floor exercise final on the schedule for day five.

It’s understood the Wessexes squeezed in a look at the athletics. 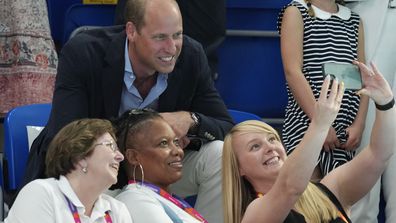