Michael and Tara give an update on their relationship – Michmutters

Michael and Tara had one of the cutest romances in Beauty and the Geek history.

The couple, who left the show officially as boyfriend and girlfriend, had also told each other they were falling in love during a cute picnic date.

And it seems like they’ve kept the spark going since the show ended, with the pair sharing a very exciting relationship update. They’ve moved in together!

Tara and Michael explained how navigating their relationship living in different states was “a bit tricky.”

“He flew down to Melbourne, I flew up to Sydney… he met my family, I met his family and then I took off overseas to Europe for a couple months,” Tara told 9Entertianment.

Michael ended up meeting Tara overseas and the pair traveled around Europe together. When they got back, Michael decided to make the big move to Melbourne from Sydney.

“It’s been fantastic. We thought we already knew each other so well from everything we went through on the show, but we’ve learned so much more about each other afterwards,” Michael said.

The pair also share the house with their co-stars Alex and Sam.

READMORE: Mike reveals where his relationship with Heidi is now

All of the cast return for the Grand Finale.

Before the lovebirds were eliminated from the show, they confessed to each other they could see themselves falling in love, and it wasn’t long after filming that they actually dropped the L-bomb.

“We said we love each other just after we finished filming,” Tara revealed.

“I thought I was already fully in love, but every single day I fall more and more in love [with Michael]. It feels like the most genuine relationship and the most genuine connection I’ve ever experienced.”

Michael was “immediately smitten” by the Beauty who ticked all his boxes from the moment he met her, but he wasn’t expecting to find love on the show.

“I came onto the experience just expecting to have a really good time and to learn from someone that I wouldn’t really understand. And instead, I met someone that just makes so much sense to me,” he said.

Michael and Tara shared a joint Instagram post updating their fans on the status of their relationship, which followers were dying to know.

“The show allowed us to experience a lifetime of things together in such a short time, and since then we’ve only fallen more in love with each other,” the pair wrote alongside a series of loved-up snaps.

Their co-stars were quick to show their support in the comment section.

“You two are just perfect! 🥰 I love you guys so much,” Tegan wrote.

Sam commented, “So proud of both of you, even though I may be the third wheel, I’ll always be your third wheel.”

While Angelique said, “THIS IS AMAZING, YOU DESERVE THE WORLD.”

We’re so happy for Michael and Tara and can’t wait to see what the future holds for them! 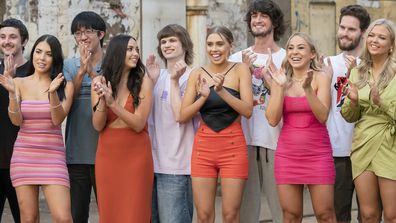 Keep up to date with your favorite contestants.